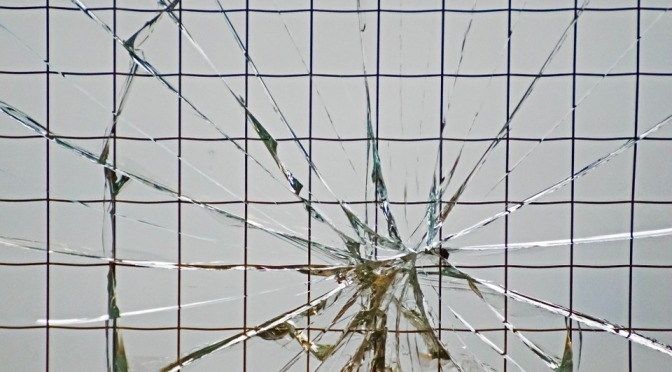 As Heather walked towards the office her fellow assistant Raif was making screeching noises.

“I can’t turn the key!” she cried as Heather reached her side.

“It’s the weather, the door swells sometimes.” Raif handed the keys over.

“I thought I had the wrong keys. I didn’t know how I could have got the wrong ones since I saw Neve lock up last night and she handed them straight to me…what are you doing?” Heather had put her bag down and perched on the slim doorstep. She tested her grip on the handle.

“When I say, turn the key.” With an indrawn breath, Heather threw herself backwards, one foot on the frame as leverage to help. “Now,” she grunted. Raif turned the key and the unmistakable pop of the lock sounded. Pulling herself up Heather went in.

“Aren’t you worried the handle will come off?” Raif handed Heather’s discarded bag over.

“Not really. It’s solid. I think in a place like this they like to make sure everything is in perfect condition.”

“Like a door that swells?” Raif said over her shoulder as she made her way out back. Heather began removing terminal covers and lifting screens. She listened for the comforting chime of the computer waking up. Stepping back, she waited longer. Then she felt along the edge of each one for the reset depression. Once she had tried every terminal she was back at the front row. No response.

She looked up at the security cameras. There was no blinking red light to indicate they were on. She moved quickly to the light switches. They didn’t work. Leaning closer she tried again. There wasn’t even the crackle of electricity.

The power was out.

She didn’t remember running to the back room but she crashed into Raif coming out, who was babbling.

“The outer door wasn’t working. I couldn’t get in. There was no air recycling, no noises! I was worried about the night guard but he wasn’t there. The door was open-”

“I know!” Raif covered her face. “I heard a noise and ran. I think she’s loose.” Heather shoved Raif behind her and reached for the door. As she pulled it closed Heather thought a shadow moved in the murky corridor. The latch clicked and she gasped in relief. A scraping sound came through the door. Jumping back, she swallowed.

“That’s a metal door, it should hold her.”

“What about the rear exit?” Raif was stepping back and clutching at the edges of her jacket. Heather tried the office phone. There was no dialling tone.

“First we need to get Head Office on the phone.” Heather pulled at the fastenings on her bag, hands shaking, and rummaged inside.

“Where is it?” She hissed. Tipping the contents onto the floor and scrambling through the items frantically she remembered someone asking her why she carried these things with her. For emergencies, she had answered.

“Do you have your phone?” Heather started patting down her pockets. “Ah!” she cried, finding it in her side pocket. She unlocked the phone screen, finger shaking, making her attempt it three times before it opened. “C’mon, c’mon. Got it!” She pressed ring. Her speaker turned on as her fingers grabbed at the phone.

“This is site 43223, staff ID 195683 Hotel Mike. We have a power outage and containment breech. Asset is no longer secure.” There was a pause on the other end. Heather heard the buzz of the hold line then another voice spoke.

“A TEAM ARE ON THEIR WAY. CAN YOU GIVE ME MORE INFORMATION ON THE STATE OF THE ASSET?”

“Out of containment sector. Only regular doors securing it.”

“No,” came the answer from above where Heather was crouched. She looked up at Raif’s reply, the other woman was watching the ceiling. Following her colleagues gaze she saw the panels shifting up and down, the movement crossing the ceiling. Taking the phone off speaker Heather hissed into the mic, “negative.”

“GET OUT NOW, HEAD TO MAIN SECTION.” The line went dead.

Standing up Heather reached for Raif’s arm. Before they could move to the front door the panels shifted again and with a crash, shattered glass rained down outside, the window shaking from the impact. The asset landed on the street outside, shaking its head and beginning to turn towards them. They dived behind a terminal. There was another crash and Heather felt vibrations run through the floor, up her arms and into her shoulders. Heather slammed her hand over Raif’s mouth when she made a panicked noise. She pulled Raif in close and they clung to each other. The only sound she could hear was her breathing. Eventually Heather relaxed her hold. She signalled that she was going to look. Raif didn’t try to stop her. Creeping so slowly that she could feel her muscles quivering with the effort, Heather peeked out from behind the terminal and looked through the front window. The street was clear. Taking a calming breath, she crawled closer. Pain lanced up her arm but she ignored it.

“It’s ok.” Raif stood up slowly. “Careful,” Heather added whilst looking at her shredded hand, “there’s glass on the floor.”

“We need to make our way to Head Office for a debrief.” Heather looked for her keys, careful not to knock her hand.

“And get you some medical attention?”

Leaving by the front door, Heather tried the key. It still wouldn’t lock so, with an exasperated look at Raif, Heather perched on the doorstep and pulled on the handle again. As Raif reached to turn the key Heather felt herself falling. She landed hard, her head smacking on the concrete. Wincing and trying to take in a breath she brought her hand up, the handle still in it.

“I think that’s a minor problem.” Raif was looking in through the window. It took Heather a moment to realise. The window was gone.

This was written as part of the Chuck Wendig Flash Fiction challenge, Ten Titles From You, over at terribleminds.com. Also, the thing about the door handle might amuse my friend Laura.

Featured image from pixabay.com and used under Creative Commons.

4 thoughts on “One Fell Swoop”

Bedtime stories must be told.